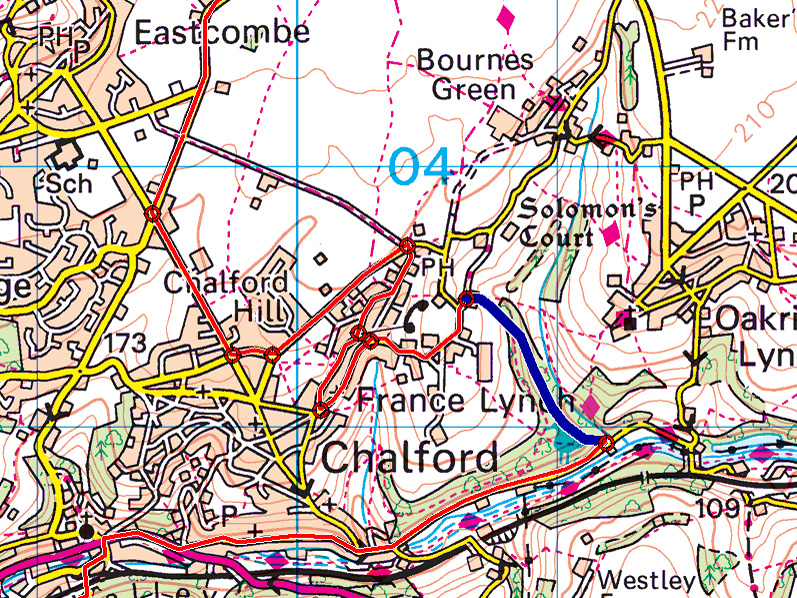 A section of the route of the 1938 Abingdon trial – Ashmeads is shown in blue.

Ashmeads is one of those Cotswold hills that has been on my ‘to be discovered’ list for a very long time. It was used for the MGCC Abingdon to Abingdon Trial in 1937 and 1938, and a facsimile of the 1938 Route Card is included on pages 80 and 81 of Roger Thomas’s M.G. Trials Cars. There’s an Ashmeads House on the road along the bottom of the Chalford Valley, so why the difficulty in locating the actual section?

The route instruction prior to the section reads “Keep S O through village [Chalford] for 1 1/2 m. where sharp L up:… Ashmeads”. The route card after the section refers to passing a Post Office and Oakridge Lynch has a Post Office, whereas Frances Lynch does not. A quick study of the OS map (see above) reveals three possible routes: (#1) up the ‘yellow’ road to Oakridge Lynch; (#2) up the obvious footpath (shown with magenta diamonds) from the valley road to Oakridge Lynch; (#3) up one of the footpaths from the valley road to France Lynch. But, whichever way I tried to follow the route on the map, I just couldn’t make it ‘work’. Even backtracking the route from Bisley (off the map to the top), it wasn’t clear which Lynch the route passed-through.

I fairly quickly discounted option #1 because I would have expected the route instruction to be “L at T”. I’d also walked option #2 and, although the footpath certainly looks like a possible trials section, I still couldn’t make the route after the section ‘work’. The breakthrough came when it occurred to me to check if France Lynch had had a Post Office in the past, and Google quickly turned-up The Old Post Office (now an AirBnB rental). But, even knowing where the Post Office had been, I still couldn’t follow the route on the map.

So, yesterday afternoon, I set off to check-out option #3. There is a very obvious track that looks even more like an old trials section than the footpath to Oakridge (option #2) and, although the track forks a short distance after the start, I’m pretty certain that the right fork is the old route (the left fork is steeper but dead-ends at a field). I then followed the route card out of the top of the section, through the village, took a couple of wrong turns (those who know the villages of the Chalford Valley will know that they’re a maze of tiny roads), and eventually I found The Old Post Office.

But the Route Card still didn’t read correctly until I realised that, although I’d approached The Old Post Office from the East,  the trial route must have approached from the West. After that ‘Eureka Moment’, everything fell into place and the route shown in red on the map above follows the route card perfectly (each red circle represents a route instruction). But why did the trial follow such a convoluted route on some very narrow roads through France Lynch when the current map shows a much more direct route? Surely the road priorities can’t have changed that much in the last 80 years, or maybe they have?

[Locals might suggest that the long deviation was to allow the competitors to visit the wonderful Kings Head pub, but it’s not mentioned on the Route Card.]