I’ve received further proof of the location of Lyn Hill. Go to the original “Where is it? – No.3” post and scroll down to the 18 February 2020 update.

Regular visitors will know that there have been no updates to this site since late September, but that does not mean that nothing’s been happening behind the scenes. I was about to embark on a major update to the Trials Sections Database but decided to change my priorities. I have, over the last three months, been creating spreadsheets for all the major trials, listing exactly which sections were used for each year. This is an expansion of the information which I published for the Cotswold Clouds Trial back in February and I now have comprehensive records going back into the mid 1990s for all the current ACTC Championship events. Non-Championship events will be included in the New Year.

So, with that exercise nearly complete, I can return to updating the Trials Sections Database confident in the knowledge the ‘First Use’ and ‘Last Use’ dates will be more accurate than they were in the past.

#3 – The HRG is on Lyn Hill, between Lynton and Barbrook in North Devon. Go the original post and scroll down to the 26 September update.

#4 – The location of Doverhay has been narrowed-down to one ‘most likely’ track. Go the original post and scroll down to the 26 September update.

So where, exactly, is the section known as Doverhay, used for the Brighton & Hove Motor Club’s Brighton-Beer Trial in 1933, and for the MCC’s Lands End Trial (generally for motorcycles only) from 1932 to 1957 (and maybe later)? 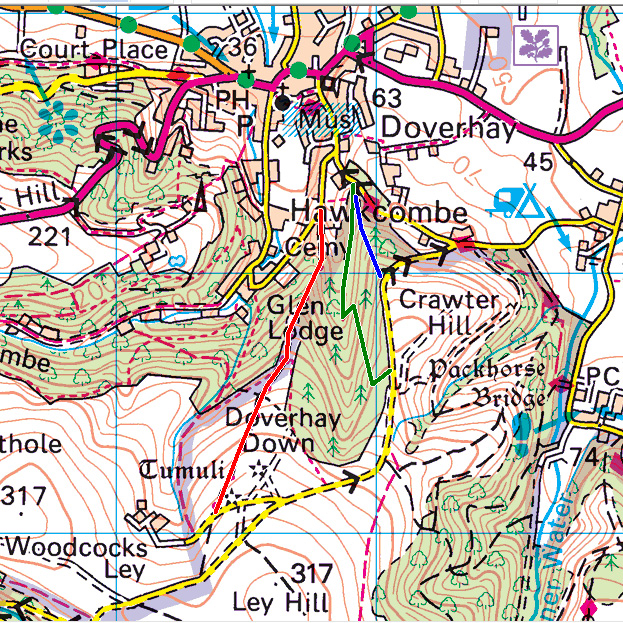 I’ve read lots of previous reports, including extensive correspondence in the MCC News of the Week back in May 2010, but nothing has been accurate enough to distinguish between the three tracks I list above. Can anyone help?

Simon Woodall posted a short piece, with a link to this post, in the MCC News of the Week 21.09.2019, and this generated responses from four MCC members, so my thanks to Neil Browne, Colin Butchers, Martyn Halliday, and Rick Howell. Piecing-together information from all four, I’m now pretty certain that the line of the section is along none of the coloured lines in the above map, although it’s closest to the Red Line.

The current best-guess is that it is a track not shown on the current OS maps (but clearly visible on the 1903 and 1949 maps and, I’m told, on the ground), which deviates from Doverhay Road (the Red Line) around OS GR SS 8879 4602 and rejoins it higher-up, around OS GR SS 8866 4566, after passing through the right-left hairpin bends which feature in the period photographs along the way. The top of Doverhay Road, where it rejoins the tarmaced ‘yellow’ road high-up on Ley Hill, certainly matches the description in the MG Magazine article linked here, whereas the top of the bridleway (Green Line) does not. Look at this point (around OS GR SS 8838 4508) on Google Street View and you can clearly see the village of Porlock and the mountains of Wales as described by H E Symons in the MG Magazine.

So … what we need now is to find a route card with more detail than the ones I have seen, which merely record the turn off the (current) A39 and assume that the drivers and riders know their way from there to the section!

Neil Browne has sent me a copy of the route card for the 1957 Lands End Trial, which clearly states that competitors should turn Right at the fork in the ‘yellow’ roads as they exit the village towards the section, so another piece in the puzzle pointing towards the best-guess route above, and not the ‘Green Line’ bridleway route. 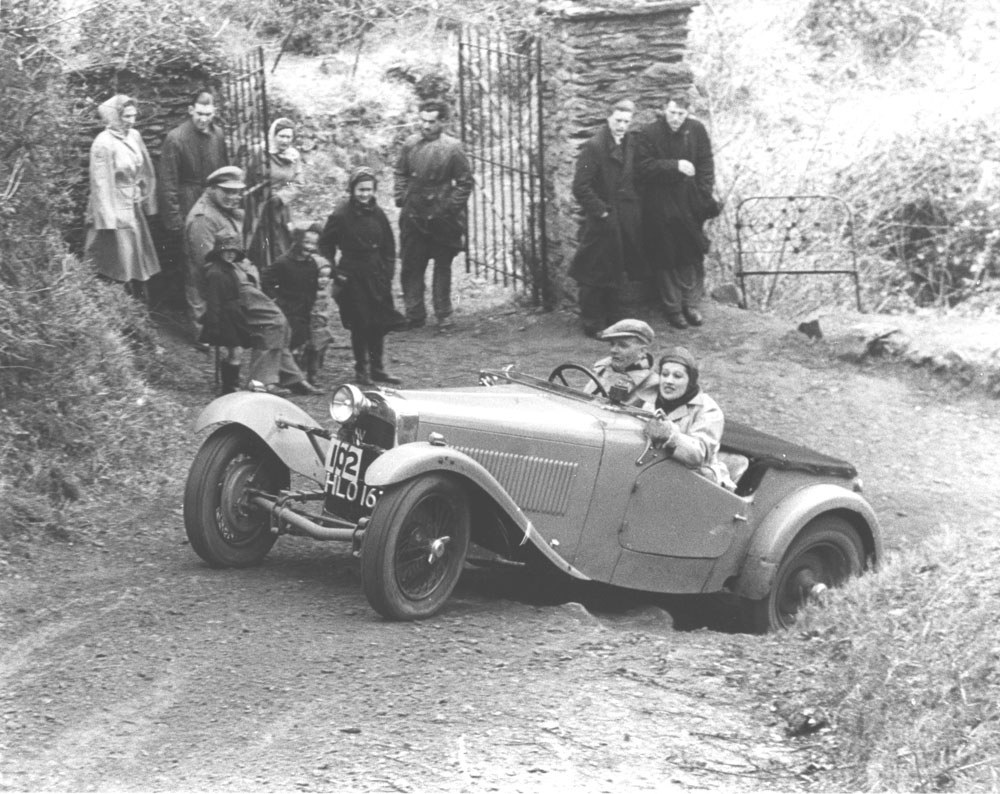 I’ve had this photo for a long time and, indeed, published it some years ago on a previous version of this website, but I must confess that I’ve lost my note of the original source (Nigel Brown? John Salter?) and some of the key information (such as who?). Whatever, it is an HRG and is, I believe, on the 195o Lands End Trial. The question is where?

I had lengthy, but ultimately inconclusive, email exchanges with both Nigel and John about this photo back in September 2011. I have a note that the 1950 Lands End sections were, in alphabetical order: Barton Steep (ST), Beggars Roost, Doveyhay (m/c only), Hookway, Southernwood, Station Lane (Hill), Stoney Street, and Yealscombe; but the Motor Sport report also mentions Ashwell so I wonder if my list is correct?

We eliminated all except Hookway based on our knowledge of the others, but couldn’t match the photo with the section known as Hookway and used by the Silverton Motor Club for their Exe Valley Trial up to 1998 (Silverton used the track west-to-east with the section start at https://bit.ly/348MSPe).

So … does anyone know where this is? Or can anyone at least confirm that No.102 was an HRG in 1950, which might help to confirm the year and, therefore, the ‘long list’ of sections to choose from?

Well … it is the 1950 Lands End Trial, and it is D.C.S.Bassett in an 1100cc HRG on Lyn Hill near Barbrook in North Devon (the list of 1950 sections, above, is obviously incomplete). Lyn Hill starts on the B3234 at OS GR SS 7196 4859 and heads south east to end at OS GR SS 7245 4827. It is clearly shown as an ORPA on the current OS Maps. Lyn Hill was used for the Lands End Trial in 1949 and 1950 only and, according to my source, the bridge over the West Lyn River was washed-away in the infamous 1952 Lynmouth Flood and was subsequently rebuilt as a non-vehicle bridge. Which explains why the hill was never used again. The pillars and gates are still, apparently, in situ on the sharp left-hand hairpin bend clearly shown on the OS maps.

If you view the B3234 on Google Street View, heading uphill towards Barbrook, you can clearly see the bridge in the valley on the left-hand side just uphill from the Olde Cottage Inne. 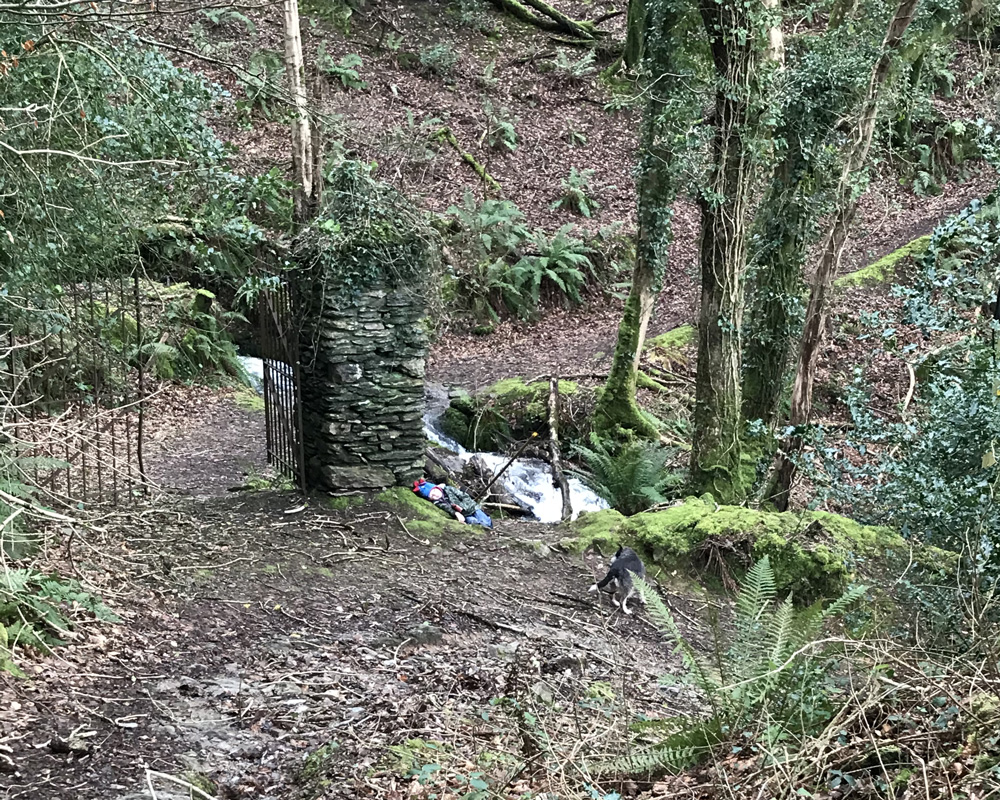 I’ve just received the above photo from Jo Goodman (of the Goodman family who own the wonderful Barbrook Filling Station, well-known to all who’ve done the Lands End Trial). I think this is final and conclusive proof that the photo of the HRG is most definitely on Lyn Hill, as described above. Are those really the same gates as were there 70 years ago? They certainly look identical!

I’m not sure where these two photographs came from, although I know that they’re both attributed to Brunell. I’ve also seen a third one, of a BMW 319, taken in the same location, but the current owner of the car had inherited the photo album which included the photo when he bought the car and had no idea where it was taken. So … does anyone know where this is?

Well … very many  thanks to Alastair Queen for setting me on the path to sorting-out this one. The event is the 1936 Brighton-Beer, and the section is Hone Horror at Hone Farm, just off the A396 to the north of Dulverton in Somerset (OS GR SS325927). For those who want a more accurate location, the cars are at https://w3w.co/tonic.fonts.corrosive. Hone Horror was listed as a ‘Brake and Acceleration Test’ and was never used again, as far as I am aware.

For those interested in the ‘research process’ read on … After Alastair saw the original post above, his research took him to https://bit.ly/2lViR41 and thence to https://bit.ly/2lUcsWO where all is revealed. I then realised that it was hardly surprising that I recognised the photograph of the Frazer-Nash BMW 319 when I saw it at Prescott in 2016, because it was the same photo (the top one above) that had been sitting in my own archive for years. Steve Fathers, who posted the photo on PreWarCar.Com, is the ‘current owner’ that I refer to above and he’d obviously made his online post several weeks after I met him.

Then, when I got to the MMM Register website, I was embarrassed to realise that this photo … 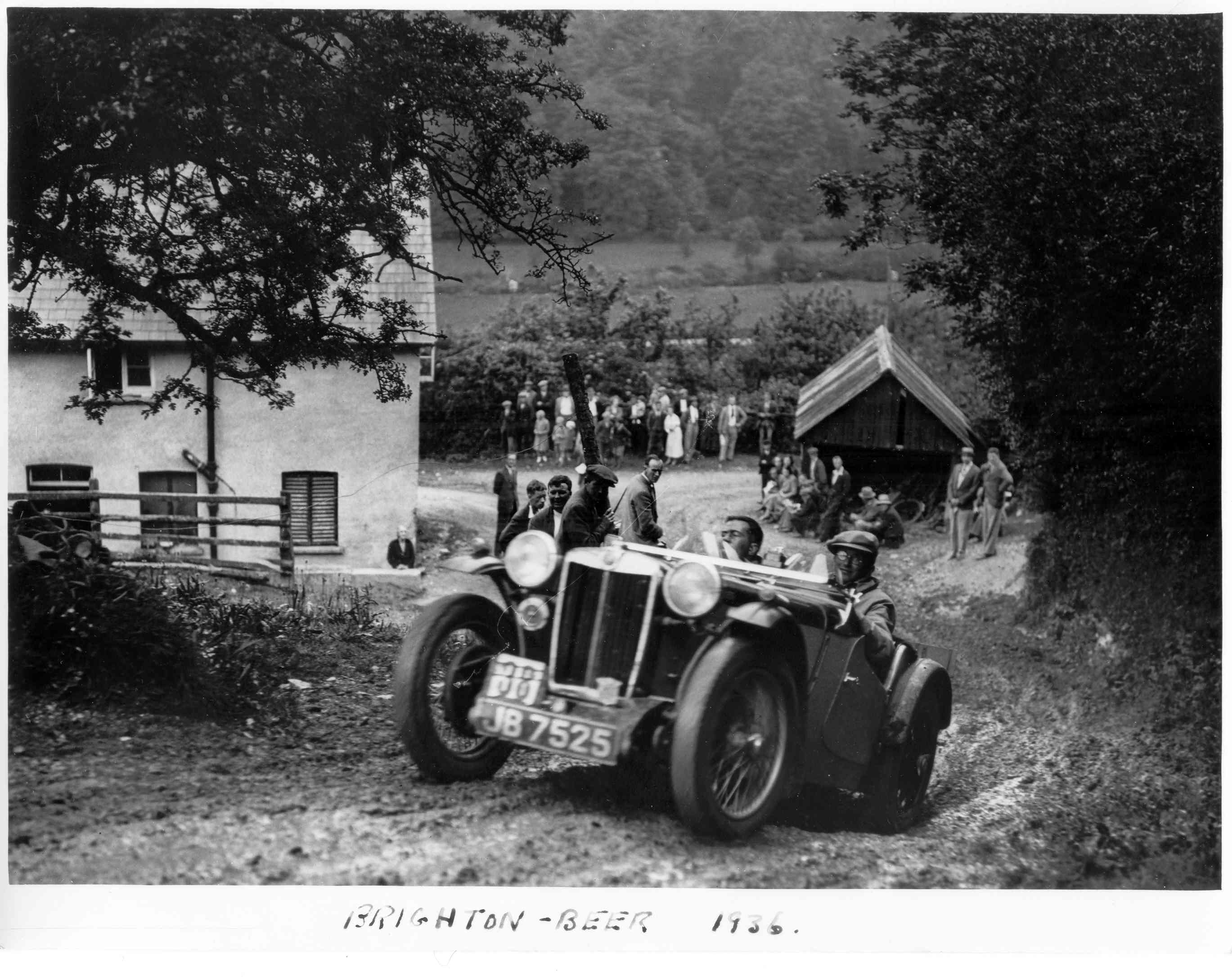 … was already sitting in my archives, clearly marked as the 1936 Brighton-Beer. No wonder the location looked very familiar although, until today, I had no idea where it was.

So … the one question remaining is … why did Brunell decide to photograph the 1936 Brighton-Beer, which was a ‘premier league’ trial in its day, at such an obscure location? Or maybe he just knew that it would produce distinctive photographs?

These two photographs have come to me from different sources. It’s obviously the same event, and at a very similar time (look at the spectators standing under the bridge), but does anyone have any idea where they were taken? 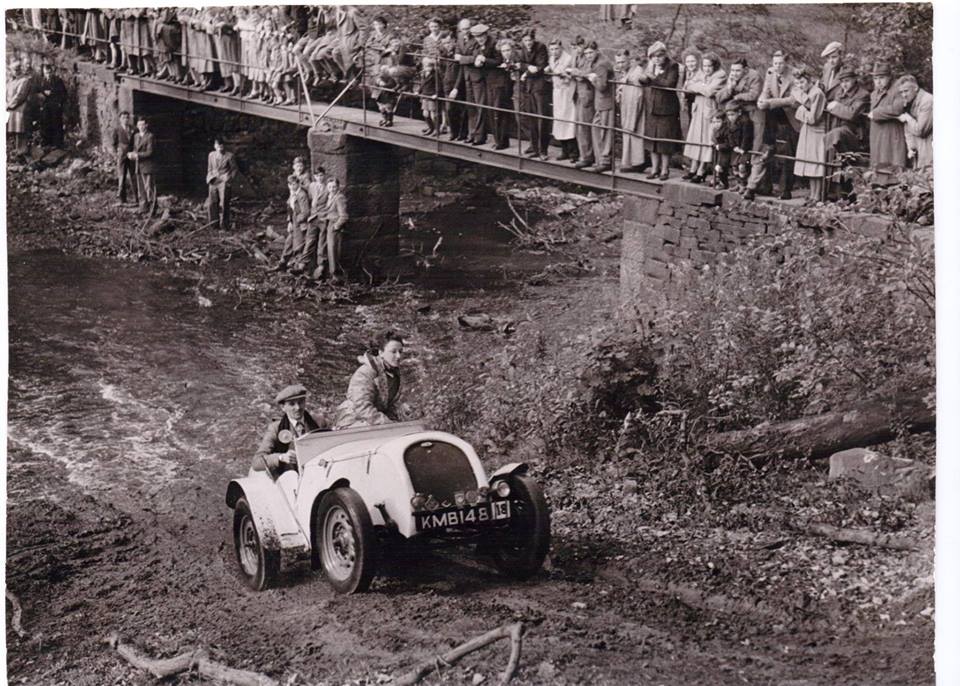 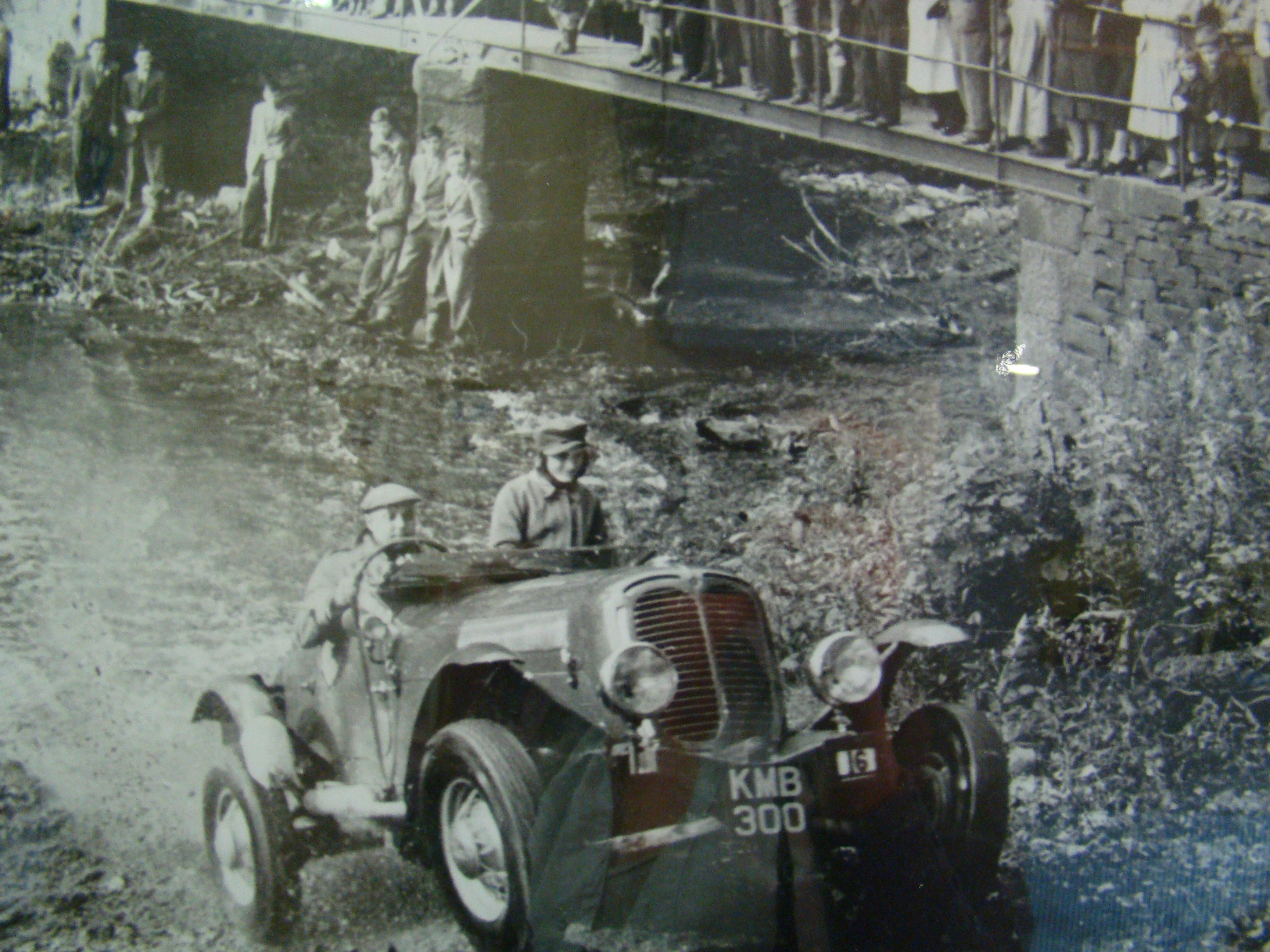 After linking this post to the Classic Trials Facebook Group, David Alderson came up with the photo below, taken from the book “So This Is Yorkshire – A nostalgic look at Motor Sport from 1910 to 1939”. I then got hold of a pre-1960 1″ OS map of the area and it clearly shows two fords, one on a ‘yellow’ road leading to/from West End, and another on an unfenced track to the east of Mogington Bridge. Both these fords, and the ‘yellow’ road over Mogington Bridge, are now submerged under the Thruscross Reservoir.

The balustrading may have changed in the time between the photos from the book (below) and the photos I have posted above, but the bridge structure does look very similar. I suspect these photos are all of West End because the road is the more major of the two, might have justified a parallel footbridge, and has a single-arrow ‘steep hill’ mark on the OS map immediately after the ford to the east.

Now … does anyone know anything about Yorkshire trials that might have included a section called ‘West End’? 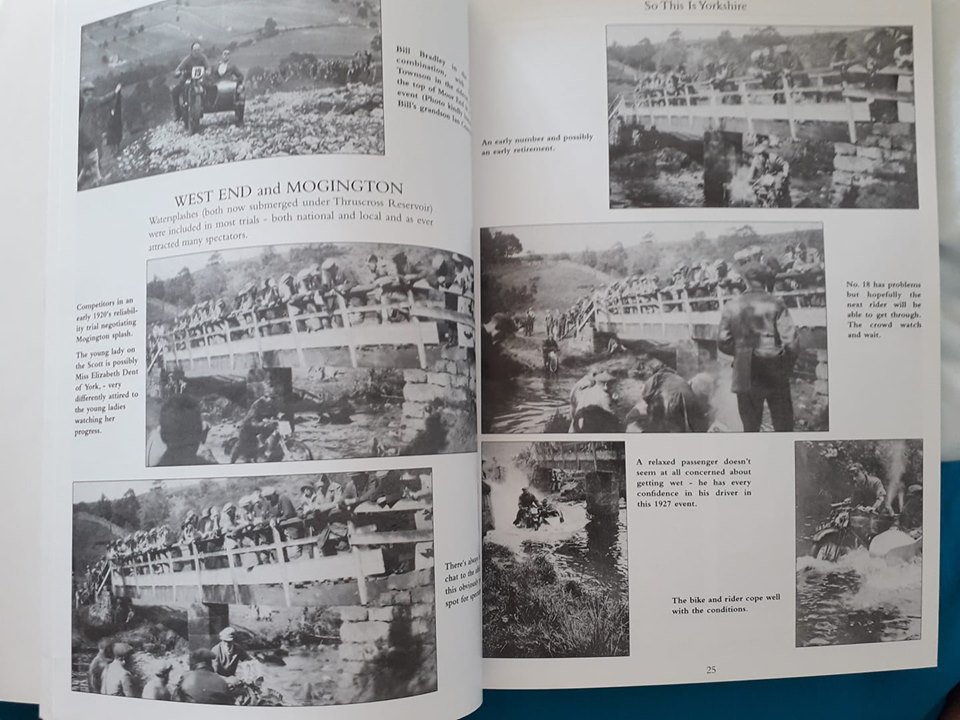 Can anyone help? I had always believed that my collection of ACTC magazines was complete (from Four Wheels Out No.22 onwards), but there are two possible gaps: