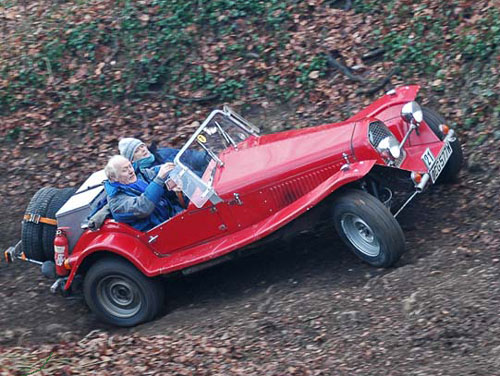 A brief history of the Marlin Roadster in classic trials

The Marlin Roadster, designed by Paul Moorhouse with looks inspired by the pre-war Alfa Romeos, has been one of Britain’s most successful kit cars. The first production chassis was constructed in 1979 by which time Paul’s prototype had already been in regular service as his everyday car for five years. Unlike many other kit cars of the 1970s/80s, which used the chassis or floor pan of the donor vehicle, the Marlin was built around a sturdy (some would say agricultural) box section chassis with an innovative roll-over bar integrated with the windscreen frame. The bodywork was a combination of aluminium for the flat panels, and fibreglass for the moulded sections which included the distinctive radiator cowl, the wings, and the rear bodywork.

The early cars, built between July 1979 and June 1983, were known as the T model and used all Triumph mechanical components, from the Herald, Vitesse, and Spitfire ranges. The following version of the Roadster, production of which started before the final demise of the Triumph-based cars, was known as the M model and used the Morris Marina as the main donor vehicle. There were also a small number of TM models, sometimes referred to as the ‘hybrids’, made with Triumph front suspension and Marina rear suspension. Although the majority of M models were built from a single donor car using all Marina mechanicals – 1275cc A-Series and 1800cc TC (twin carb) B-Series being the typical engine specifications – many were built using Marina running gear with engine/gearbox combinations from other manufacturers – Ford Kent and Ford Pinto, Fiat Twin-Cam, and Rover V8 being the most common.

The Roadster was joined by the Ford Cortina-based Berlinetta 2+2 (with hardtop) in 1985, and the Ford Sierra-based Cabrio (open top) in 1991. In 1993 the Roadster and Berlinetta models were sold to YKC Engineering. The Cabrio stayed with Marlin who have subsequently introduced the Hunter, Sportster, and 5EXi models. With the exception of some early YKC Roadsters, none of these later models have any presence in classic trialling.

Marlins have competed in classic trials since the very earliest days of the Roadster and they are still one of the most popular, and competitive, ways of taking part with Roadsters forming by far the largest one-make group in Class 7. Cars in modern trials take a serious battering and Marlins, particularly the Marina-based M models, are prized for the inherent strength of their design and the ease with which minor mechanical damage can be repaired. But to be competitive, and survive, trials-prepared Marlins require some modification from the typical build of a road car and most sport Marina van axles, raised suspension, 14″ wheels, sump guards, and the inevitable external toolboxes and spare wheel carriers. 1800cc BMC engines are by far the most common although there are a significant minority with Ford and Fiat 4 cylinder engines.

Marlin numbers in the MCC events rose steadily through the 1990s and early 2000s, peaking in the late 2000s when there were often over 30 Marlins in the Exeter and Lands End Trials (the Edinburgh Trial has always attracted a smaller entry). But numbers have been dropping steadily through the 2010s, with an 20+ year low of only 7 Marlins entered in the 2019 Exeter Trial. Overall numbers having been dropping in all trials but the decline in the number of Marlins competing has been particularly marked. Possible reasons for this decline include: many long-term owners are competing in less events each year, and avoiding MCC events whilst still competing in a smaller number of ACTC events; the Suzuki X90 has replaced the Marlin as the ideal ‘first car’ for newcomers who wish to give classic trialling a try; and Class 7 is currently in the ‘doldrums’ with not only fewer Marlins but fewer Lieges and fewer ‘Modified-Beyonds’. The main exceptions to this rather gloomy picture are the events run by the Stroud & District Motor Club where Marlin representation is still strong.

Since I bought my own Marlin in 1995 I have been keeping a comprehensive record of Marlins used for classic trials, although the Register was not started until 1997. The data has mostly been gleaned from information in the public domain, such as event programmes, start sheets, results, and photographs, but I’ve also added a few comments of my own where appropriate.

I’d very much like to make sure that the information is as accurate as possible so please let me know of any errors and omissions using the Contact Me details on the right-hand side of this page. I’m happy to make the Notes section as long or as short as owners wish, or to remove all the details if anyone has objections to it being made publicly available in this format.