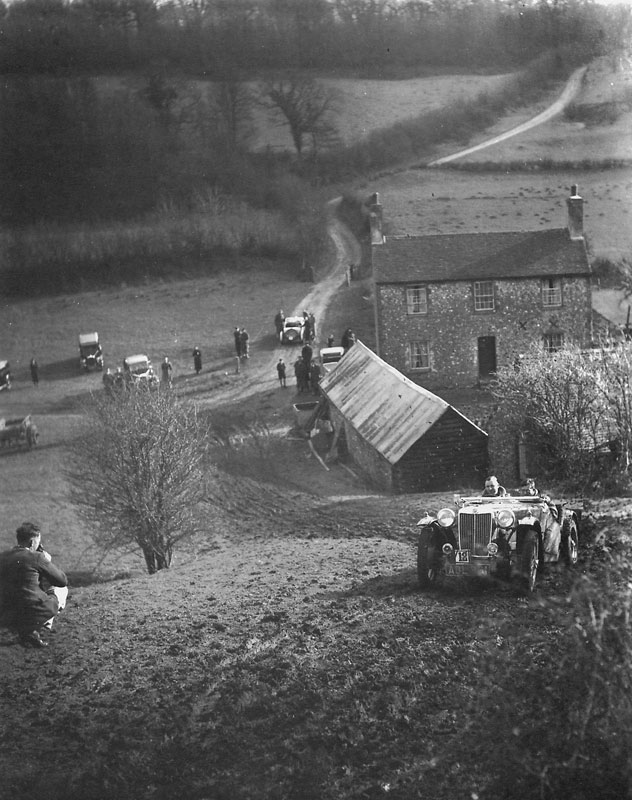 Dane Hill in Kent is hardly a well-known PreWar section, so why does it feature here? Solely because Brunell took some photographs there, in 1937, which have been famously mis-attributed.

Enthusiasts had known for many years that the Brunell photographs on page 48 of Thomas, and pages 122 and 156 of Bacon, were not New Mill in Cornwall, as captioned in both books, and were highly unlikely to have been taken on the Lands End Trial as they all showed cars with double-figure entry numbers. (At the time, MCC events generally had over 100 motorcycle entries, and motorcycles always took the lower numbers.) It was clear, from a study of the spectators and the non-competing cars, that they had all been taken on the same event, but which event, and where was the hill?.

Then, in January 2004, I received this email from Colin Butchers:

As I said, I was always doubtful about the “New Mill” pictures. The terrain did not look like Cornwall, the buildings did not look Cornish, and the low numbers ruled out the MCC Trials. Then I was browsing through a pre-war “Light Car” Magazine and came across a report of the 1937 Wye Cup Trial and there was a picture of Dickie Green on the same hill, and it was captioned as “Dane Hill near Canterbury”. Now Kent has a number of Danes and another trials nut, Lewis Elgood, suggested that it could be Dane Farm near to the village of Bladbean in the Elham Valley a few miles south of Canterbury.

I visited the site – down a gated public road – very, very rural and whilst I felt certain that I had found the right place, nothing seemed to fit. I then checked a pre-war map and realised that the hill itself was a “white road” which does not appear on the current o/s maps. The lane coming down from the top right corner in the photographs is still there and you can see one of the gates (open) just to left of the farm house. This lane then turns left (I think Colin means right. AKB.) at the bottom of the hill and goes up the bottom of the valley through Covert Wood. The trials section branched off at the bottom of the hill and went more or less straight up the other side of the valley to meet another lane, which still exists, near Palmstead. The farm house has been rebuilt as have the farm buildings but they are all more or less in the same position. The trials hill is now fenced off at the bottom but you can clearly see the line of it winding up the hill between low banks and parallel lines of shrubs.

Strangely “Wheelspin” refers to Palmstead but says nothing about Dane (Page 124 in my edition, referring to the Kentish Border Car Club’s November Trial. May describes Palmstead as “straightforward stuff”. AKB.). Palmstead is at the top of the hill and I can find no other likely site, so I wonder whether Dane and Palmstead were one and the same.