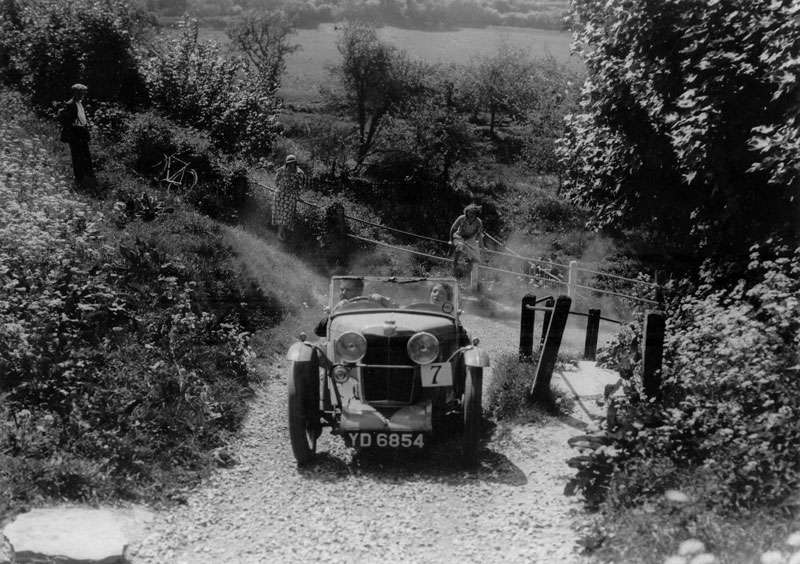 From the JES (Jesus) Jones collection with thanks to Mike Dalby.

I’d long wondered about the location of the wonderfully atmospheric picture on Page 161 of Bacon but it wasn’t until August 2007 that Bryan Ditchman positively identified it as Ibberton Church Hill. (There is another picture of Ibberton on Page 106 of Bacon.) Shortly after I received the very similar photograph, above, on a CD from Mike Dalby and this was clearly captioned as Ibberton. Then two photographs of Ibberton were published on the Austin Harris website. But the final impetus to create this page came when Jonathan Elliott provided me with the two photographs below, showing just how little the section had changed in the last seventy or eighty years.

According to Cowbourne, Ibberton was first used for the MCC Exeter Trial in 1929 (which is maybe why Autocar magazine decided on a visit to take the photographs published on the Austin Harris website), then every year until 1934. For these six years it was the final hill, before the trial finished in Shaftesbury (1929, 1930, 1931) or Blandford (1932, 1933, 1934). Remember that in the 1930s the Exeter Trial “about-turned” at Exeter before heading back east to the finish, rather than continuing further south-west as it does now.

Ibberton seems to have fallen out of favour with the MCC from 1935, when Meerhay became the final Exeter section for a few years, although Ibberton was used for other clubs’ events until at least 1936.