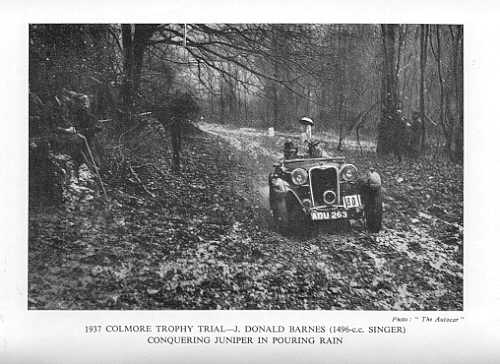 Before the War, Juniper was the most feared of all the hills in the Cotswolds and rates more entries (18) in the index of Austen May’s Wheelspin than any other section. It was also the one about which I’d received more “Do you know where it is?” requests than almost any other before I published the first version of this page on my “Section Begins” website in February 2001. The sheer volume of these requests was enough to justify making Juniper No.1 in this series.

Austen May doesn’t refer to Juniper in his very brief account of the 1934 ‘Abingdon’ (held on 21st April) although he did win the event. Nor does he refer to the 1934 ‘Gloucester’ and I assume that he didn’t enter. The Light Car in its ‘Pre Gloucester’ issue of 7th December 1934 merely records that Juniper is a new hill with a “nasty reputation” which was presumably based on it having stopped everyone in the earlier ‘Abingdon’. I don’t, unfortunately, have any records of the results.

In Wheelspin, May first refers to Juniper in connection with the 1935 ‘Gloucester’ when the organising North-West London Motor Club reserved the right to include a secret hill, not shown on the routecard, “if deemed advisable on the day”. May writes that many drivers assumed that the secret hill would be Juniper and the weekend before the trial saw quite a few ‘trying-out’ the hill – no ban on practising in the 1930s! It was included but, other than recording his own successful climb, May makes no further reference to the hill on that event.

Juniper next features in Wheelspin in connection with a most intriguing event, a match trial between the clubs responsible for organising the two main Cotswold Trials – the NWLMC (‘Gloucester’ Trial) and SUNBAC (‘Colmore’ Trial). This took place on the day after the 1936 Colmore Trial (therefore presumably 23rd February) with teams made up of eight members from each club. May in his N-Type MG Magnette, representing SUNBAC, was paired against Guy Warburton’s 30/98 Vauxhall (featured in the photograph below). May records that Juniper was ‘halved’, both cars spinning to a halt at exactly the same spot.

The 1936 ‘Gloucester’ was May’s first event in the famous ex-Toulmin MG ‘Cream Cracker’ JB 7521, when he was one of only four competitors to clean Juniper on his way to winning The Gloucester Cup. In the 1937 ‘Colmore’, only fifteen competitors cleaned Juniper, May not being one of them, but the section was much easier for the 1937 ‘Gloucester’ failing only thirty nine out of the seventy-odd competitors. It was back on form for the 1938 ‘Colmore’ with just fourteen competitors going clean but, by the time of the MGCC’s ‘Abingdon’ Trial, held on 14th May, a spell of fine weather had rendered Juniper “almost innocuous”. May, having sold JB 7521, was a spectator for the 1938 ‘Gloucester’ when Juniper again figured in the Route Card. Dig out your copy of Wheelspin and read his account, in the chapter entitled Farewell to JB 7521, of taking cine film of the competitors.

What was it like to drive? May describes the hill in his account of the 1936 NWLMC/SUNBAC match trial referred to above and I’ll let him speak for himself:

“Just when I thought I had got away with it, the Magnette spun hectically to a standstill almost in a split second. Breathlessly I watched Warburton come tearing up through the trees, slewing from side to side. The old Vauxhall slid to a standstill, wheels churning furiously, exactly on the same spot as had the Magnette.” 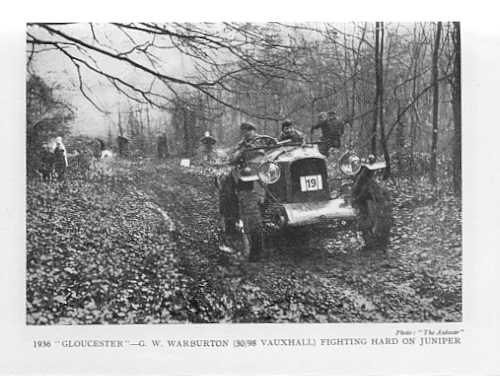 May refers to Juniper just twice in his Post-War book More Wheelspin. For the 1946 ‘Gloucester’ Trial, there were only four hills, including Juniper, and each was attempted twice. May describes Juniper as ‘impossible’ the first time around and the organisers moved the ‘section ends’ boards half-way down the hill for the second run allowing just nine competitors to register a ‘clean’.

His next reference to Juniper is on the Cheltenham Motor Club’s ‘Cheltenham’ Trial run on 22nd November 1947. Only three went clear but, much more interesting, is May’s observation that the section was sub-divided and the scores for each section were shown in the results in a similar way to the ‘A’ board system now used by the MCC for Wooston and Simms. May records that twenty three competitors failed in the second part of the section after clearing the first part and only the successful trio cleared the second and third parts. From the way it is described, this was clearly a highly unusual practice at the time and shows just how severe Juniper was considered – was this one of the very first examples of a section being sub-divided?

Just one week after the Cheltenham Trial, the basic petrol ration was withdrawn and trials effectively ceased (May notes an ‘obituary to trials’ in the November 26th issue of The Motor). May does not refer to the 1947 ‘Gloucester’, traditionally run on the first weekend in December, so I can only assume that this event was one of the first trials affected by the ‘basic ban’. We do know, thanks to the wonderful video from Peter Seabrook-Harris, that Juniper was used for the 1948 Gloucester Trial but I have no record of its use after this event.

A section called “Wicked Juniper”, in the same woods but to the south-west of the classic Juniper section, has featured on the route of Stroud & District Motor Club’s Cotswold Clouds Trial since 2005.

When I first published this page in February 2001 I was pretty confident that I’d found the true location of Juniper although I did have a few nagging doubts. The most obvious doubt centred around the track in the background of the Donald Barnes photograph, above, which I thought must be the Old Painswick Road although the lie of the land wasn’t quite right. In late 2003 I discovered that others were having doubts as well and Colin Butchers had been doing his own research based on PreWar photographs of MGs on the hill, and the wonderful short video clip of the 1948 Gloucester Trial which included several seconds-worth of film of cars on Juniper.

The result was that a group of us met up on a beautiful sunny day in late April 2004 to track down the location of a number of Cotswold hills, including Juniper. Colin was convinced that the Juniper section deviated to the right off the line of the footpath, about 100yds above the start line, and went more-or-less straight up the hillside following the line of a stone wall (You can see spectators sitting on this wall right on the extreme left-hand side of the Donald Barnes photograph). I’d obviously missed this deviation when visiting the area in muddy February but it seemed blindingly obvious when we arrived in sun-dappled April. There was a clear line up through the trees, although without any sign of a change in surface from the ‘bottomless’ clayey mud and leaf mould which is typical of so many Cotswold beech woods. 30 or so yards up the clearing we turned around, looked back down, and there was the footpath drifting away to the right EXACTLY like the Donald Barnes photograph. There was absolutely no doubt that we were now on the correct line. See photographs below.

But the questions didn’t end there – “How far up did the section go?”. Looking up through the trees the section seemed a formidable obstacle, even to a modern trials car. Colin was sure that he could remember reading some reference to a gate but hadn’t managed to find one on his previous visit. But seven pairs of eyes were obviously better than one as we quickly spotted a hinge pin embedded into a substantial piece of timber that could have been a gatepost, then the rotted remains of the gate itself, and finally a very rusted hinge. At that point we were convinced that the section must have ended as the competitors forked-right off the main hill and through the gate onto a comparatively level track – looking up, the hill just seemed to go on for ever.

Bryan Ditchman then got out his precious album of photographs belonging to Dickie Green – famous PreWar driver of Frazer-Nash and MG cars, and a member of the ‘Musketeers’ MG works team. We had at least one picture in a very similar location to the Donald Barnes photograph – location now confirmed of course – but another was much more interesting (See below). We’d already checked the car and event with ‘Cowbourne’, and confirmed that Juniper WAS included, so it seemed pretty likely that the caption was correct – but where had the photograph been taken? A pair of eagle eyes spotted what looked like a set of timber boards marking the left-hand side of the section which, at this point, was on a gentle left-hand bend and a gentle left-hand bend could only mean that the section carried on up the hill rather than forking-right through the gate. So on up the main hill we plodded and eventually arrived at a substantial ‘bombhole’ on the left-hand side, quite deep enough to warrant protection to stop competitors sliding off into the undergrowth – and the lie of the land fitted the photograph perfectly. See photographs below.(Postscript: The reference to the gate is on P159 of Wheelspin where May states “… Dickie Green … turning in the gateway above the fork, after a gallant but unavailing effort.” This confirms that the section did carry on above the gateway as we had decided during our visit.)

At this point we could see that we were close to the top of the climb ‘proper’ so, conscious of time moving-on and with a visit to Leckhampton deemed an essential end to the day, we decided not to continue on to confirm the exact exit route – that would have to wait for another day. Walking back down what we were now pretty confident was the true line of section, Juniper looked absolutely awesome and truly deserving of its mythic status among PreWar trials hills. I can think of few comparable ‘modern’ sections, except possibly some of those used for Stroud’s Ebworth Trial (hardly surprising as it’s held in a beech wood only a couple of miles up the road), but none of them remotely approach the length of Juniper which must be well over a quarter of a mile long from the start line on the Old Painswick Road. Remember that we’re not talking about a ‘made’ woodland track, this is just a particularly wide clearing up through the trees on mud and leafmould so it’s hardly surprising that Juniper became virtually unclimbable, except during the driest of summer trials, when ‘knobblies’ were banned.

The section is best approached from the B4070 Stroud to Birdlip road at Bulls Cross. Follow the signs for Wick Street until you reach a crossroads, at OS GR 865084, with a stony track on the left. Park here as this is the nearest you’ll get to the start of the section without inconveniencing the locals. Walk on along the road towards Wick Street and Stroud and the start of the section is on the left at the top of a slight rise, just before a cottage, and is clearly marked with a Public Footpath sign.

As you walk up the footpath you’ll see the track branching-off to the right following the line of the stone wall but, as this takes you off the public right-of-way, I cannot encourage you to repeat our illicit exploration. If you carry on up the footpath you’ll eventually join a stony track. Turn left and this will bring you back to your car.

This Post was originally published on 19 December 2015 as a Page on this website and is re-posted here with minor amendments.