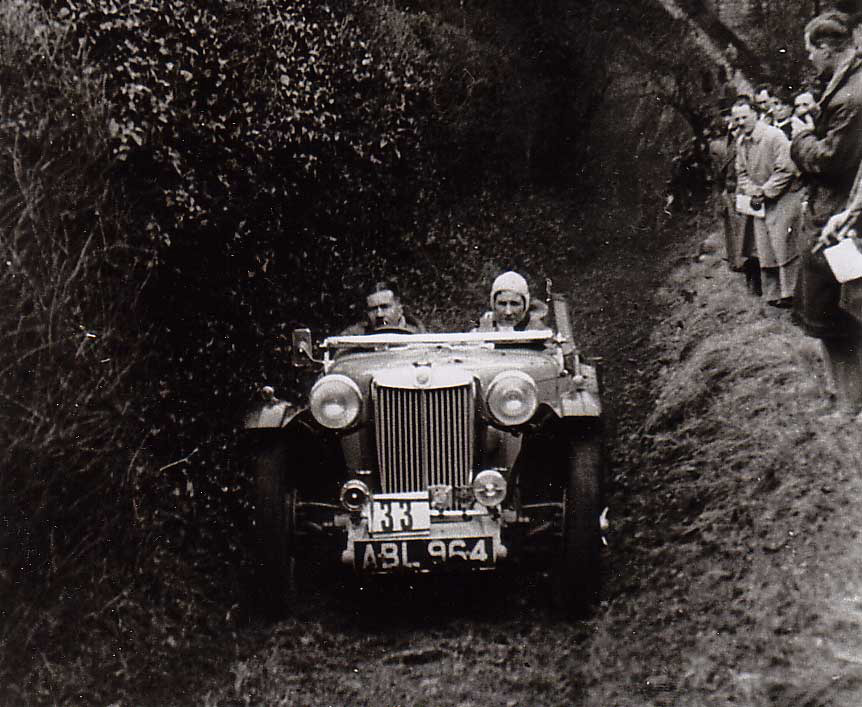 From the JES (Jesus) Jones collection with thanks to Mike Dalby and Bryan Ditchman.

Leckhampton is interesting for two main reasons: it caused a sensation when first used for the 1935 Colmore Cup, as described in detail by Austen May in Wheelspin; and it is right on the outskirts of Cheltenham and probably closer to a major town than any other section that I can think of. But Leckhampton was no easy drive-through, it was (and still is) as steep as Simms or Blue Hills and three or four times as long.

Leckhampton was used for the 1935, 1937 and 1938 Colmore Trials and one can only assume that the chaos caused in 1935 led the trial organisers to think again in 1936. Everything that really needs to be said about the section is contained in the extract from The Autocar report of the 1935 Colmore as quoted, verbatim, in Austen May’s Wheelspin.

Frightful rumours had been current all day concerning the severity of the last hill, called in the programme Leckhampton and known locally as the Jinny. This hill turned out to be like at least four Simms Hills rolled into one, slippery surface, 1 in 2 1/2 gradient, and tractor were all there. (Note: The tractor, actuating a wire cable, was stationed at the summit for the purpose of hauling up cars unable to climb unassisted, it being quite impossible to manhandle a car to the top.) Yet Simms is in the heart of desolate Dartmoor, while the Jinny is on the very outskirts of the far-flung town of Cheltenham, leading off the main road.

Special permission had been obtained for the use of the hill, which is common land, and reserved as a rule for walkers only. (Note: It formed the base of a now dismantled wire-rope railway to the quarry at its summit.) But the police stopped the first cars from ascending, and were only prevailed upon after some delay to allow proceedings to go on. Even with the short, sharp Simms … there was, in the recent London-Exeter Trial, a long queue of cars waiting. With the immense length of this new terror, Leckhampton … a delay would, in any case, have been inevitable, and apart from the short lane leading to the gradient, there was only one place for the waiting cars – the main Cheltenham-Birdlip road!

Rapidly this road became choked as well with a double line of spectators’ cars. A policeman strove nobly at the entrance to the narrow lane, but he could not be everywhere at once, and for a time complete chaos reigned. Main-road congestion, too, was inevitable with “racers climbing a precipice” so near a populous town …

To add to the difficulties of the situation, or, perhaps, to solve them, the tractor broke down when some twenty-two competitors had tried their ascents, of whom Haden with his MG Midget and Attwood with his Magnette were successful. A massive cog burst asunder, and those who were stuck on the hill – were stuck! A six-wheeled lorry was next reversed down to pull up a car which had stuck, but the caterpillars of this broke under the unequal strain, and the car pulled the lorry down the hill. That finished it. The hill was abandoned, the cars waiting in the lane had to reverse, and the competing cars lined up in the main road went on their way.

In Wheelspin, May reports briefly on the 1937 Colmore when Leckhampton (17 successful climbs) was second only to Juniper (15 successful climbs) in severity. May then comments that in 1938 “Leckhampton seemed to be losing its sting … the hill was conquered by more than twice as many cars as got up Juniper – thirty-four in all.” And that, we can only assume, was that with just three events over four years. Leckhampton is not mentioned in More Wheelspin.

The line of the section is still clearly visible today although the banks which feature in the 1937 photographs have long-ago fallen-in and there are now substantial trees growing on what was the trackbed of the old tramway. Tramway Cottage, at the foot of the section and clearly visible on the right-hand-side of the top two photographs below, has a significant place in local history as the scene of the “Leckhampton Riots”.

Those with an interest in the industrial archeology of the area can read more in the article available from the link below. The trials section follows the line of Middle Incline (B3 on the map on page 44 of the article) and the cleans exit route was along the track marked E3 on the same map. Interestingly, the table on page 43 shows the gradient at 1 in 3.5 but I think this may be an average including the flatish section at the very bottom alongside Tramway Cottage. As the incline was abandoned in 1924, and the whole area acquired by the Council in 1929, I think we can assume that there was some sort of hard, if loose, surface in the late 1930s rather than the deep mud and decades of leaf-mould visible today.

Pass through the Cheltenham suburb of Leckhampton on Leckhampton Road, climbing gently all the way. Shortly after the road steepens sharply, and bears round to the right, turn left into Daisybank Road. Pass the bottom of the section and turn right into the public car park. Retrace your route a few yards to Tramway Cottage and the “Public Footpath” sign pointing up the section.

It is a steep climb, generally following the left-hand bank which is clearly visible in the PreWar photographs, until it abruptly levels-off at the old quarry workings. Turn sharp right here and follow the very obvious track (the “cleans” route in the 1930s) which descends gently, with a stone wall to your left, until you eventually return to the main Leckhampton Hill road just a few yards up the hill from the turn into Daisybank Road.